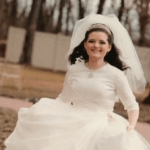 While the media has reported on parts of the Orthodox Jewish community that get it wrong when it comes to mental health treatment, Aviva Bennett-Tribuch is an example of a born and bred religious Jewish woman who has not only fought for her own mental health recovery when the medical system failed her, but is helping to remove the stigma of postpartum depression for others.

Bennett-Tribuch grew up in Kew Garden Hills, Queens in an Orthodox family and had a Bais Yaakov education, including a year at semilary in Israel. Queens College was her next stop. The college was a mix of Orthodox, secular, and non-Jewish students. “Growing up the way I did, it was not a difficult transition for me. I grew up very open-minded. I was very blessed. We talked about politics, we talked about tons of Judaism…there was no question that was ever a bad question.” Being trained to go against the grain has helped Bennett-Tribuch throughout her life. “…Personally, professionally, medically. I attribute [this] to my upbringing. Mostly to my parents but also teachers and rabbis in the community.”

After her first pregnancy – a son, which she had four years ago – Bennett-Tribuch was very sick. She had experienced hyperemesis gravidarum, throwing up 5-15 times a day. Despite the great care she received, including from her father and brother who are doctors, she was suffering. “After he was born, I had post-traumatic stress disorder.” That resulted in food anxiety, food phobia, nightmares and more. She went for help immediately.

She was connected to RELIEF an Orthodox Jewish organization that makes referrals to mental health professionals. She went through cognitive behavioral therapy which helped, and she made a full recovery. A few years later, she became pregnant with her daughter, and the hyperemesis was even worse. “I was on complete bedrest for most of the pregnancy. I was on four IV’s a day, I had PICC line, I was sick. I lost 45 pounds in that pregnancy, but my spirits were really high because I was expecting what happened after my son would happen again, and I would bounce right back. If I needed therapy, I would go for it.” But things were much more dramatic than that.

After the birth, Bennett-Tribuch needed a blood transfusion and was hospitalized with post-partum pre-eclampsia. “It was bad. I wasn’t in a good place. My medical care was very bad. I came home, and I didn’t want to look at my daughter. This was a very wanted child who we prayed for for a long time.” But Bennett-Tribuch couldn’t feed her, couldn’t look at her. “I didn’t want to even go into the room.” At the four-week mark when she was allowed to get out of bed again, she realized that she didn’t want to be around her husband either, who was acting as mom and dad and working full time. She called her sister, but didn’t reveal everything. She did a questionnaire at the pediatrician but didn’t answer it honestly because she was terrified her children would be taken away. In her unwell state, she was able to game the system and her extreme postpartum depression went undetected by the doctor.

Growing up, mental health was not a taboo issue, though she doesn’t remember it coming up. “I became really good friends with Aviva and Zvi Gluck. He is the founder of Amudim, an incredible organization…helping victims of sexual abuse, victims of addiction and mental health.” She reached out to them when she was going through her trials. Amudim directed her to her current therapist, who has helped her tremendously. “I sat down in front of a wonderful therapist…that was extremely helpful.”

She credits her husband as an amazing source of strength in her life, sticking by her through the ups and downs she had with her medical journey. Bennett-Tribuch now realizes that there is more that can be done to help those who are suffering. “Every single woman who gives birth should automatically have someone to talk to.” When she had balked at filling out the questionnaire, she feels she would have shared more easily with an in-person meeting where she felt safe. “They [could have] figured out in two seconds that I need help and then sent me off to the right people.” Just like lactation consultants get one-on-one time with new moms, she would like to see consultants who help mothers sort out their feelings. “What about the thousands of women who are suffering in silence? I wouldn’t have a relationship with my children if I had not gotten help.”

Bennett-Tribuch started posting about her journey on social media. The positive response was overwhelming. “There was a lot of encouragement that came and many cries for help. To me, it was worth everything I went through to try and help one person.” Bennett-Tribuch is available to help advise those who are struggling. “The Jewish way is to help yourself get better…we’re about asking questions.”

The post This Orthodox Jewish Woman Fought To Treat Her PPD When The Medical System Failed Her appeared first on Jew in the City.

There are no upcoming events at this time.